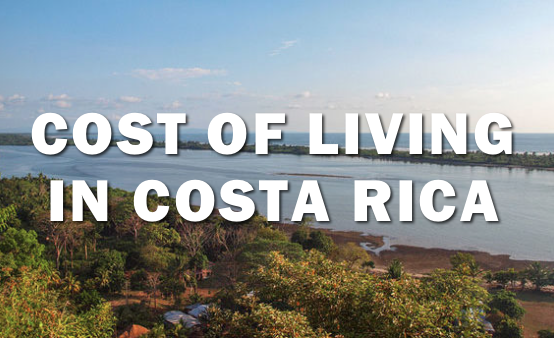 Costa Rica has been an increasingly popular destination among tourists and expats for several decades. And, while it stands out heads above the rest for its abundance of untamed nature and the healthy lifestyle it offers, the cost of living in Costa Rica is not among its biggest selling points.

The cost of living in Costa Rica is the highest in Central America. Yet the number of tourists it draws each year and the hordes of expats who’ve chosen to call it home, has not dwindled, despite the rising costs.

Let’s dig a little bit deeper into what’s really driving the cost of living in Costa Rica, and why so many North Americans and Europeans still think it’s totally worth it.

So, just how much higher is the cost of living in Costa Rica?

Like any other factor, the cost of living in Costa Rica can vary drastically from one area to the next. It also depends entirely on your lifestyle. Live in some relatively less touristy place and shop more like the locals, you can easily get by on $2000 or less per month for a family of two. On the other hand, if you decide to make your home in a newly renovated high-rise condo in the Central Valley, where you dine out every night and shop to your heart’s content, you could easily need double or even triple that amount of money to live.

Not everything is more expensive in Costa Rica.

For example, due to the inexpensive cost of labor, many services can be had for a very reasonable price tag. Domestic help, like a maid or cook, can be as low as $4 per hour. A Haircut will only set you back $10-20. Even the labor for auto repairs comes at an inexpensive rate. It’s the replacement parts that will set you back a pretty penny. Education in Costa Rica is affordable, as is the country’s health care (even at private facilities), which is of the highest quality. Property taxes are also low.

There are also a number of things that generally run about the same as their North American counterparts. Expenses in this category include utilities and services such as internet, cable, some cell phone plans, and electricity. However; using the “prepago” cell phone plan… you may only spend about $15.00 per month… depending on how much you use it or call North America.

You can expect to pay about the same for some for these as you would in North America; although, depending on your location, you may have no need for heating and/or air conditioning expenses. Rental Housing is also relatively inexpensive, with nice-size well-appointed accommodations ranging from $900 to $1800 per month.

However, as with all the above, it’s important to consider what you’re comparing these costs to. While much less on average than in the U.S., Canada, or Europe, individual budget items in Costa Rica can run significantly higher than in the rest of Central America.

To answer this question, it’s important to consider a few important factors about the country. First of all, Costa Rica is a small country that must import a large number of the items people use for daily living. Add up the cost to get the items brought into the country, plus the hefty import taxes the government loves to tack on, and things like automobiles and appliances can become incredibly expensive. On a smaller scale, the same is true for everyday items like imported wines or brand name peanut butter. So, to save considerably on your household expenditures, avoid anything imported or shop at a ‘duty free zone”. The country’s relatively high utility costs are another big contributor to the higher cost of living in Costa Rica. They’re due to the monopoly held by government-run ICE (Instituto Costarricense de Electricidad, or the Costa Rican Institute of Electricity).

Any vehicles brought into the country carry an extremely high import tax. Yearly vehicle Registration “Marchamo” can be quite pricey as well, depending on the age, make and model of the car.

Gas in Costa Rica is expensive, which adds even more to the cost of owning a vehicle in Costa Rica. The poor conditions on many of Costa Rica’s roads, can create additional wear and tear on vehicles; which can create the need for more frequent mechanical work. The rough roads usually lead us to the most beautiful locations, so are worth the wear and tear.

What about food costs in Costa Rica?

This category varies quite a bit depending on what and where you eat. Dining out, can get expensive fast! That is, unless you dine at “sodas,” which are small, locally-run eating establishments. You can eat at local restaurants for $5 to $9 per person instead of the $15 to $20 you might expect to pay for a regular restaurant or chain franchise.

If you like to cook, your best bet is to shop at local markets or do business with street vendors. You can choose from a great variety of locally-grown produce, beans, rice, and meat for a fraction of what you’d pay at the big box supermarkets, which closely resemble and even trace their roots back to some well-known U.S. chains. At the local street markets, you can buy large pineapples for only $2. You can also get freshly baked bread much cheaper from the local bakeries. On average, you can save about 30% on your grocery bill by avoiding the supermarkets. You might expect great deals on fish and other seafood, but even these can get a little pricey, especially the further you get from the coast.

Why pay more to live in Costa Rica?

That’s an easy question to answer. And, no, we’re not going to say that you get what you pay for. Although you do. The fact is that putting the cost of living in Costa Rica up against other Central American countries is hardly an “apples to apples” comparison. Sure, you can find cheaper places to live, some even awfully close by. But Costa Rica offers so much more.

In Costa Rica, you get a well-educated strong middle-class population who are friendly and welcoming to outsiders. You get political stability. You get some of the friendliest, helpful locals. And, dare we forget to mention, you get one of the most amazingly beautiful settings on the entire planet. Most importantly, though, you get choices.

With so many options available, in terms of housing, consumer goods, and services and amenities, even the climate you want to live in – there are over 40 micro climates to choose from; you can pick and choose what’s important to you!  The beauty of it is, you CAN choose!

So; if this top expat destination is on your short list of countries you’re considering, don’t let the marginally higher cost of living in Costa Rica dissuade you.

We are here to answer your questions, share our personal experiences of living in Costa Rica, etc!

Do you have specific questions about real estate in Costa Rica? Feel free to contact us for more information or inquiries.

View all posts by ajimenez